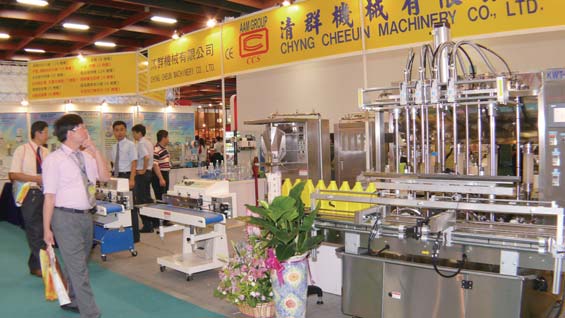 AAM Group – Chyng Cheeun is one of the top three Taiwanese companies in manufacturing continuous sealing machines, and manufacturer of other food machinery such as vacuum packing machines, food mixers, and rice & bean processing machinery.

Twenty years ago, AAM Group – Chyng Cheeun began manufacturing continuous sealing machines and so far we have expanded the range of products to over fifty items. Wu said that the food-packaging machinery industry has been met with difficulties in these days, due to the rise of the price of raw materials. “The price of stainless steel has risen by twenty to thirty percent these past years,” she said.
“In addition, the increasing number of food packaging machinery manufacturers has intensified competition within the industry”, added Wu.

AAM Group-Chyng Cheeun has invested in research and development of its products to stay competitive. “We have continued to develop new products to meet the demands of our customers such as faster and better-performing machines”, said Wu, “But recently, as we’ve mentioned before, AAM Group-Chyng Cheeun has found itself losing out to lower-price food-packaging machines from China in certain overseas markets. The company has a hard time finding buyers in south-east Asia, where they have been told that they could pay less for China machines.”

Wu said that she wouldn’t even consider expanding to China. However, she said Taiwanese food-packaging machinery manufacturers possess an advantage over Chinese manufacturers in the quality of machines and service. Moreover, Wu said that the company has received orders from Taiwanese-run factories in China, who prefer the common background that the businesspeople and the AAM Group-Chyng Cheeun share.